After a disappointing loan spell at Valencia, Michy Batshuayi left the La Liga outfit and joined Crystal Palace in January.

The Eagles signed the forward on a temporary deal until the end of the season and Het Nieuwsblad claims they hesitated for weeks before signing him in the winter market.

It’s claimed the Belgium international is ‘having a good time’ these days, but that won’t be for long because he will have to leave Selhurst Park after his loan deal expires and return to his parent club, Chelsea.

The 25-year-old has scored twice in nine league appearances and in the past two matches, he was left on the bench as Roy Hodgson preferred his compatriot Christian Benteke.

Het Nieuwsblad takes a look at where it went wrong for Batshuayi at Palace.

To start with, they claim the style of play at the London club does not suit him and he had difficulty getting involved in the game. The English side were ‘not always satisfied’ with the player’s attitude in training. 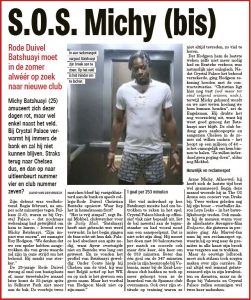 It’s claimed that there would be suitors for Batshuayi because of his qualities, but after struggling at Valencia and Palace, clubs would ‘think twice’ before signing him.

The Belgian newspaper does not specify whether the Chelsea owned attacker will be joining a new club on a loan deal or a permanent move.

Claims of Leicester City’s bid for Brazilian – Club and agent...