While the Sergej Milinkovic-Savic to Manchester United rumours have gone very quiet since there’s no indication Paul Pogba is leaving Old Trafford, Lazio are still being linked with his potential replacements.

Players like Yusuf Yazici have been mentioned time and time again, but a new one has been added to the list, and that’s Crystal Palace’s Luka Milivojevic, according to Corriere dello Sport.

The Serbian’s contract situation (he only has one year left at Selhurst Park) has intrigued the Serie A side, and while the Premier League club value the 28-year-old at €20m, there’s hope a deal could be done for less than that (maybe even half).

Milivojevic apparently ‘doesn’t seem intent on renewing’ his contract with Palace going forward, and that leaves the door open for a departure. 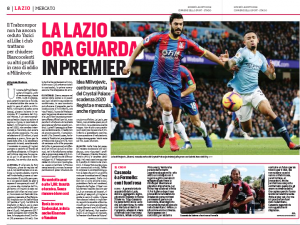 It’s said Crystal Palace could sell if faced with an ‘appealing offer’.

Considering he is the club captain and Roy Hodgson counts on him a lot, we’ll believe it when we see it, and with no indication that Manchester United will make a move for the Lazio star, this story might never go further than this.