That’s what Mundo Deportivo are reporting in today’s newspaper as they report on Real Sociedad’s interest in the Eagles custodian.

The La Liga side are studying the option to take Guaita immediately or when his contract expires at the end of this season.

In the event the Spaniard leaves Selhurst Park in the ongoing window, Roy Hodgson’s side plan to ‘cast their net’ on the Red Devils player.

Mundo’s report primarily focuses on Real Sociedad’s interest in Guaita and when explaining what Palace could do to replace him in January, they mention the Argentine.

Another option is to use Jack Butland, who arrived at Palace from Stoke City last summer. 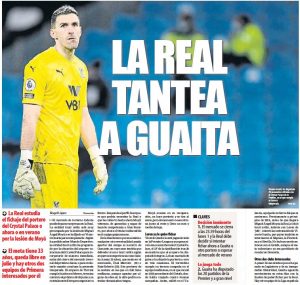 Ole Gunnar Solskjaer has not included the 33-year-old in his plans at United this season and he will have an opportunity to leave the club before the window closes on Monday.