For Brondby, one man is mentioned: Frederik Rønnow.

It’s stated that Crystal Palace and Nottingham Forest made attempts to sign the player during the summer, but neither club were ‘lucky’ enough to get him. Brondby are doing well this season, so may be against a sale, but it’s still presetned as a possibility.

Crystal Palace and Nottingham Forest could ‘come again’ for the player, believe BT.

Frederik Rønnow is a 25 year old goalkeeper, and has a contract with Brondby until June 2019.

In November the same Danish newspaper had claimed the player said ‘no’ to Nottingham Forest, not being tempted enough to join the Championship club. It’s unclear what may have happened to potentially change that situation. 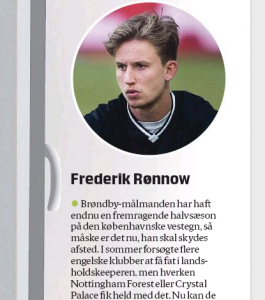 Keener on a move to Crystal Palace, Rønnow was left disappointed when that option ‘ran aground at the last minute’.

At the time of the previous report, it was explained Brondby would have to balance their sporting ambitions with financial needs when considering any January approaches for the player.