Both Crystal Palace and Newcastle United were left ‘frightened’ by Marseille’s asking price for midfielder Morgan Sanson this summer.

The French midfielder has long been linked with a move to the Premier League, and this summer was no different.

Palace and Newcastle were reportedly two of the interested parties, and at one point it was reported that the Magpies were close to sealing a move.

That never happened, though, and it seems that Marseille’s asking price for the 25-year-old was the reason he didn’t make a transfer.

L’Equipe report today that both clubs, as well as Everton, were interested in signing the midfielder this summer.

However, Marseille’s demands ‘frightened’ them, with the French side wanting at least €25m to allow the midfielder to leave the Stade Vélodrome. 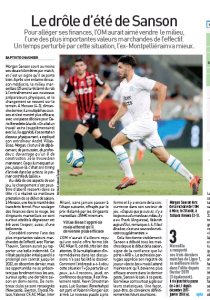 That was a price neither club was willing to pay as Sanson ended up staying and has since made a strong start to life under new manager André Villas-Boas.

It just goes to show, though, that even with all the money floating around in the Premier League these days, there is still a price that some won’t meet.