Loaned to Trabzonspor until the end of the 2020-21 season Alexander Sørloth isn’t really an issue Crystal Palace have to worry about.

The Norwegian striker has performed incredibly well in Turkey so far this season, scoring 28 goals in 43 appearances in all competitions, as well as picking up nine assists, which has caught the eyes of many clubs around Europe.

One of those were KAA Gent, who are on the lookout for a new striker this summer, and preferably one with the prerequisite of being a hard worker and measure 1m90 or taller (just under 6’3”).

The Belgian side, however, only have a limited budget to achieve their goal, which is around €6m.

Considering Sørloth initially cost Crystal Palace £8m and he’s played very well at Trabzonspor, that immediately put him out of their reach.

This is what Het Nieuwsblad are reporting on Monday, claiming the Norwegian’s name ‘came on the table, but fell off again just as quickly’. 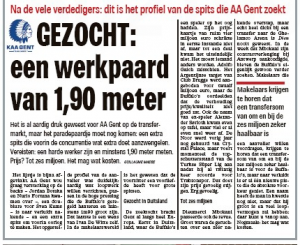 Seeing as Sørloth leads the Süper Lig’s top goalscorer race with his 20 league goals, it ‘increases his price considerably’, making it a ‘very delicate’ situation for Gent.

It’s no surprise the Belgian club turned to the Crystal Palace loanee, even for just a little bit, as they know him well from his six month loan spell between January and June 2019.

That, however, wasn’t the most productive time for Sørloth, who only managed to find the back of the net five times in 22 appearances.