Turkish newspaper Milliyet report Crystal Palace manager Roy Hodgson has been watching Alexander Sörloth’s performances ‘in awe’ and he believes the Norwegian is the kind of player he needs at the moment.

Palace have only managed to score 28 goals in the Premier League this season and Hodgson thinks Sörloth could have made a difference.

The 24 year old has scored 28 goals in all competitions for Trabzonspor, enjoying the best season of his career.

Milliyet claim Hodgson will continue to follow Sörloth’s performances until the end of the season and he’s still not given up on him.

Trabzonspor have the option to make Sörloth’s move permanent for €6.5m this summer, but if they do that a €9m release clause will be activated. 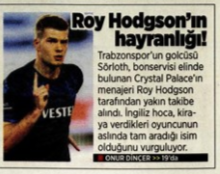 They feel Sörloth could be worth much more than that, and that’s the reason why they haven’t completed the signing of the player.

The Norwegian has another year left on his Trabzonspor loan deal. His contract with Crystal Palace will expire at the end of June 2022.