When France Football announced this week’s edition of their magazine would be a transfer special, we braced ourselves for a Steve Mandanda story, and we were right to do so.

If you’ve followed our coverage of the French media over the past few months, you’ll be fully aware of the constant rumours sending the Crystal Palace goalkeeper back to his former club, Marseille, since his first season at Selhurst Park hasn’t gone to plan. 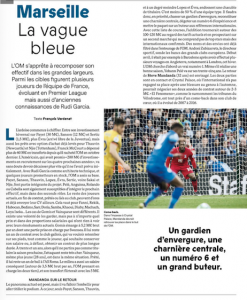 Of course, a rather big injury got in the way, and the managerial change from Alan Pardew to Sam Allardyce really didn’t help him, but giving up so soon on his dream seems a bit of a waste.

Then again, at 32 years of age, playing regular football is what is most important, and a return to Marseille would provide him with that.

France Football on Tuesday look at the situation, and bottom line is that Mandanda remains close to a move back to France, following contacts between the club and the goalkeeper.

As for Crystal Palace, who remain the biggest obstacle in this operation, the French magazine explain the Eagles would be prepared to negotiate the remaining two years of his contract for around €2-3m.

That would represent a profit on a 32-year-old who only played 10 games for them.

Not bad, to be honest.