According to Turkish newspaper AMKSpor, English clubs are interested in signing Galatasaray midfielder Badou Ndiaye this January, with Stoke City and Crystal Palace in the mix.

AMK claim Stoke City are continuing with their interest in the Senegal international, and that Crystal Palace have now joined the race to sign the 27 year old.

Roy Hodgson and Paul Lambert will be looking to strengthen this month, with Crystal Palace the more attractive option given their bounce this season after a managerial change.

It was recently reported in Turkey that Galatasaray are willing to do business for offers in the region of €20m, but the 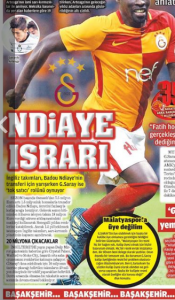 Turkish side may wait until after this summer’s World Cup in the hope the player’s valuation increases.

Galatasaray are in the title race and they aren’t under pressure to sell Ndiaye, but an offer from the Premier League could be tempting.

Stoke or Crystal Palace would have to come up with a figure and payment plan which tempts Gala into a quick sale.

Ndiaye joined Galatasaray from Osmanlıspor after rejecting West Ham United last summer, and has played 16 games for the Turkish giants this season.