With the money from Aaron Wan Bissaka’s sale to Manchester United in their pocket, Crystal Palace have work to do this summer.

Finding a replacement for the youngster will be one of their priorities given his departure to Old Trafford has left a gaping hole in the Palace defence.

Finding such a player will be no easy task given Wan Bissaka’s unique skillset but it appears Roy Hodgson and his team have identified Atalanta’s Timothy Castagne as the man they want.

La Gazzetta Dello Sport claim that the Eagles have already offered €21m for the Belgian full-back, ‘insist’ on the deal, and won’t give up on their attempts to sign him.

However, they are likely to face frustration. The newspaper reports that Castagne is in discussions about an extension at the Serie A club. 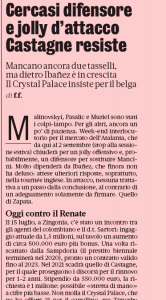 So far the two are apart over wages, with him wanting €1m and the club offering €500,000 but it’s possible there will a ‘handshake’ at a lower figure.

It’s also claimed that Castagne ‘wants Bergamo’, suggesting he would turn down an offer to move to Selhurst Park if there’s any chance for him to stay where he is.

Whether that will deter Palace remains to be seen and perhaps if they can offer him the wages Atalanta won’t, this deal won’t be as unlikely as Gazzetta make it sound.