The Peruvian international, who also has Newcastle United and Watford as admirers, is travelling to England for the preseason and his club hopes that can help a transfer over the line.

It’s O Jogo who comes up with this information today, saying Benfica want to get rid of his salary, which is €4m a year before tax. Crystal Palace, Huddersfield and Stoke would likely look to get a reduced rate, which would either so no loan fee and an attractive buying clause, or Benfica continue to pay a percentage of the player’s wages.

However, O Jogo say the Portuguese side would demand a €2m fee to take Carrillo for one season. Benfica believe the Premier League represents the best chance of getting this money. 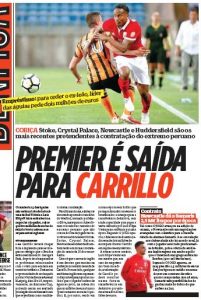 Benfica are hoping the player can impress during a loan spell, so they can sell him at the end of the season for around €20m.

Carrillo signed for the Lisbon club in a controversial move from their rivals Sporting last summer, and despite joining as a free agent, the Eagles had to pay over €6m in signing fees.

Carrillo hasn’t impressed for Benfica, which is why he’s being linked with Crystal Palace, Stoke and Huddersfield, rather than Europe’s biggest clubs.

But since Benfica are desperate to let him go and he seems keen on the move, it’s best to think twice before believing all these Premier League clubs are in for him.

It seems too perfect to be true.