Over the past month or so, various reports have indicated Leicester City retain an interest in Marseille’s Florian Thauvin.

The Foxes’ effort to sign the winger is highlighted in today’s edition of L’Equipe. However, they are not the only English club chasing the 28-year-old.

Crystal Palace have their eyes set on the France international and it’s claimed the Eagles and Sevilla have made contact with the player’s camp.

Although the contacts were made, the newspaper states talks haven’t progressed yet as they are ‘not in the final stages’.

The former Newcastle United man’s contract runs down at the end of this season and his future is in ‘suspense’.

Marseille held talks with his camp last December and believe there’s a chance to retain the player, ‘as long as the talks continue’.

The financial aspect could be the reason for the attacker to sign an extension, despite the contacts made by Roy Hodgson’s side, Sevilla and other clubs.

Thauvin earns €420,000 gross every month and is aware it will be difficult for him to receive similar wages elsewhere due to the economic impact caused by the global pandemic. 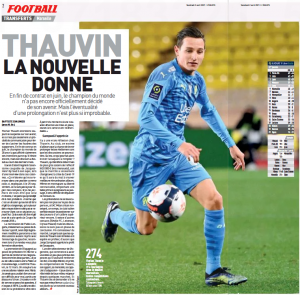 L’Equipe are of the belief clubs interested may find it difficult to exceed these figures.