Portuguese side Benfica could be joining Crystal Palace in the battle for PSV goalkeeper Jeroen Zoet, the Portuguese press says.

According to A Bola, the Lisbon side, who actually have Eintracht Frankfurt’s Lukas Hradecky as their priority, could go for the Dutchman in case they fail with their plan A.

newspaper claims Crystal Palace have Zoet as a second option as well, as Jasper Cillessen would be on top of Ronald Koeman’s list.

But with PSV’s crisis after being knocked out from the Europa League, some players could leave, with the goalkeeper attracting reasonable attention. 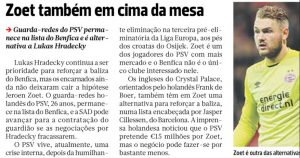 Zoet, A Bola confirm themselves that a deal could be done for less.

But only time will tell if Benfica or Crystal Palace will end up changing their plans and finally turn their attention to the Dutchman.