Antonio Adan to the Premier League is something of a transfer rumour tradition. The 30 year old Betis goalkeeper has been repeatedly linked with a move to England, with a long line of Premier League clubs credited with interest.

None of the links have ever appeared especially concrete, largely because it was never clear that Adan would be a better option than those he would supposedly be replacing.

Monday’s edition of AS brings West Ham and Crystal Palace into the equation, explaining Adan was wanted by both towards the end of the transfer window. 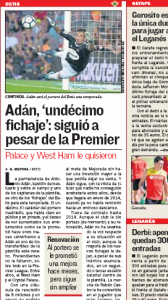 At West Ham, Adan would have replaced Adrian and provided competition to Joe Hart.

There’s no explanation of Crystal Palace’s plan for Adan, but they probably have the greater need of any English club linked with the goalkeeper in recent years. Frank de Boer may feel somewhat let down that he didn’t get another goalkeeper in at Crystal Palace during the window.

Steve Mandanda’s exit wasn’t a surprise and Wayne Hennessey and Julian Speroni aren’t exactly an impressive pair to take the season on.