Even though Crystal Palace continue to be linked to River Plate striker Rafael Santos Borré, the Premier League side are no longer the strongest club in the race.

Wednesday’s edition of newspaper Olé brings a report claiming that Lazio have now joined the battle for the 24-year-old.

They write that Crystal Palace, Porto and Real Bétis had all been already following the player, but it’s the Serie A side who are the club who have ‘the best present’ as they build a team to play for Champions League next season.

Borré’s staff say there have been no contacts from Lazio so far, but the talk in the Italian capital is that the club would make an offer of US$15m for the player. 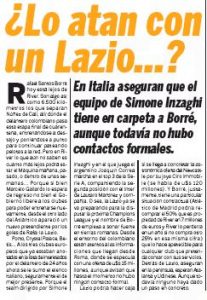 Even though it’s been a long time since Crystal Palace started being linked to Borré, we’ve never seen reports from Argentina saying the negotiations had developed in any way.

Let’s see if a move from Lazio will now encourage other clubs, like Roy Hodgson’s, to finally make their attempts for the striker as the leagues around Europe head towards completion.

Santos Borré has scored 12 goals in 20 Superliga games so far this season.