Bringing in Patrick Vieira as their manager to replace Roy Hodgson, Crystal Palace took what many might consider a gamble.

The former France international has done relatively well in his post playing career so far, but with a lack of experience outside of France and the MLS, it will be interesting to see how he fares in the Premier League.

Either way, he’s now in charge at Selhurst Park, and the transfer window is underway, as the club look for a new forward.

Tying down Christian Benteke for another two years as well as having Jean-Philippe Mateta and Jordan Ayew up front, there still appears to be a desire to sign a striker, with Alassane Pléa on their list.

That’s according to L’Equipe, who explain that Borussia Mönchengladbach have given the player an ‘exit pass’ this summer, and while he still has two years left on his contract with the Bundesliga side, they would rather sell him than Marcus Thuram. 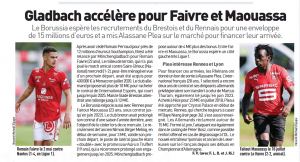 Bought for €23m, Pléa was also reportedly ‘approached’ by Crystal Palace in the early stages of the transfer window, although it doesn’t appear to have gone much further than that for the time being.

Should they try and pursue this, however, they are likely to face competition from Rennes and Lyon, with the German club said to be asking for €15m to release their man.

A certainly affordable fee for a club of Crystal Palace’s stature, and we’ll have to wait and see if more comes from it.