Even though the Portuguese media admitted that Porto would be the underdogs for the Champions League quarter-finals against Chelsea, there was clearly some hope the Dragons could advance from the tie.

We say this because there’s a large disappointment following the Blues’ 2-0 win in Seville last night, with local newspapers feeling like the match played by Sérgio Conceição’s side deserved a much better result.

The front page of two major Portuguese newspapers show it all. Starting with Record, they bring a headline saying ‘It hurts like this’, highlighting the shots and corner stats to prove that Porto managed to create several chances.

They write: ‘A missed opportunity. This was the feeling that prevailed at the final whistle of yesterday’s game and the expression couldn’t be more suitable. In fact, it could be a little more accurate if conjugated in the plural. From what was seen on the pitch, both from FC Porto and Chelsea, the Dragons missed a good opportunity (and a handful of goal occasions) to leave this first leg of the Champions League quarter-finals in an advantageous position.’ 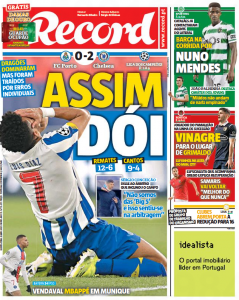 O Jogo went with something similar, as their headline ‘€250m aim’, referring to the amount spent by Chelsea in signings this season.

‘Two mistakes and bad finishing stopped the Dragons of ruling the result just like they ruled the game,’ they say.

‘If the defeat in Turin was probably the tastiest in the history of FC Porto, yesterday’s is certainly the most bitter of the season and will have cost many hours of sleep for Porto fans. Cruel, very cruel the way FC Porto lost, for two individual lapses, a game in which they were almost always superior to a Chelsea that on paper, are worth 500 million euros more’. Porto manager Sérgio Conceição had similar feelings about the result as well. Speaking to the local media after the match, he claimed Porto deserved to win.

“The result is extremely unfair, but what counts were the goals that Chelsea scored and that we did not score. The team played a very good game, always very consistent in defensive terms, always attacking with danger, pressing high when they had to press, lowering when they had to lower, defining the block well, within what was planned. In that, the players were fantastic ”

Now with little hope for the second tie next week, Record shows that it’s ‘difficult to turn around, but there’s football left to, at least, threaten’.