There was always likely to big a big Ivan Perisic story in 24Sata today. It was they who, in March, went big with the claims of Jose Mourinho meeting the player face to face. That meant a move to Manchester United was close to completion, as far as the Croatian newspaper were concerned.

Therefore claims in Italy of much the same over the past few days haven’t really taken Croatia by surprise, because they’ve pretty much said it all already. Still, it needed to be covered and, for reasons known only to themselves, 24Sata have taken the Liverpool angle.

‘When Mourinho wants something, he gets it’ it’s pointed out, and Jurgen Klopp doesn’t quite fair so well. The Liverpool manager ‘has been in love with’ Perisic since they were 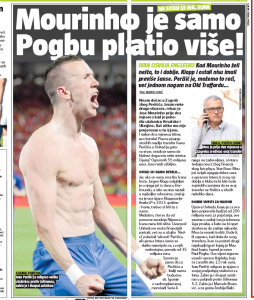 together at Borussia Dortmund, report 24Sata, and wants him at Liverpool.

Although Klopp and Perisic didn’t part on the best of terms, the Croatian newspaper say the relationship was quickly mended, to the point of Liverpool making Inter Milan a transfer offer.

That offer was €35m, something described as laughable for those in charge at Inter Milan. Manchester United can offer a lot more than Liverpool, and 24Sata say Perisic has ‘one foot’ at Old Trafford already. They sound very confident on a deal, just like they did in Match.

Monday’s edition of Gazzetta dello Sport covers Perisic’s apparent goodbye to Inter fans at the end of the team’s 5-2 victory over Udinese on Sunday. The Croatian would prefer to move to Manchester United, say Gazzetta, with PSG also interested, but Inter require them to pay €55-60m rather than €45m.

There’s no mention of Liverpool, or Chelsea, with the latter thrown into some reports recently. 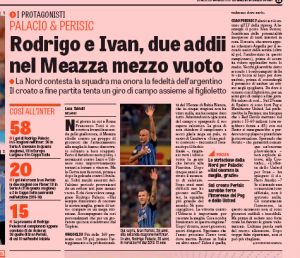 Despite much excitement about Italian claims over the past few days, there’s no great advance from what the Croatians claimed in March: Mourinho wants the player and therefore should get him.

Perisic is very much a Mourinho-type-player.

He’s over 6ft, aged 28, and a footballer who plays wide but isn’t what one would consider a typical winger. Mourinho doesn’t really ‘do’ typical wingers, at least in his recent jobs, but very much does ‘do’ 26-28 year old signings who offer a forward threat but who also work in a disciplined role which doesn’t present many risks.

In his last two summer transfer windows with Chelsea, Mourinho signed 7 players between the ages of 26 and 29. The others were 25 year old Diego Costa, Baba Rahman (likely not a Mourinho signing), who was 21, and 36 year old Didier Drogba.