Celtic’s trip to AC Milan is something of a double edged sword.

Should Neil Lennon’s side lose to the Rossoneri, who are currently five points clear at the top of Serie A, then the pressure will rise further on the Glasgow club and their manager. Yet if they win, it will be seen by some as a match with no meaning given Celtic can’t now qualify for the knockout stages of the Europa League.

At least it’s a chance for them to get away from Celtic Park, and that’s covered by Tuttosport on Thursday. For their Italian audience, the newspaper explain there’s currently a ‘crisis’ at Celtic and Lennon is in serious danger of losing his job.

They explain the protests from some fans, and how that’s impacted the players. The positive for Celtic is being able to ‘leave their problems in Glasgow’, but Tuttosport don’t seem convinced.

It’s stated that if the plan was to bounce back against Milan, then it’s not looking great because the expressions on the faces of the squad when they arrived in Italy were ‘anything but those of players who were convinced they were coming to Milan to do 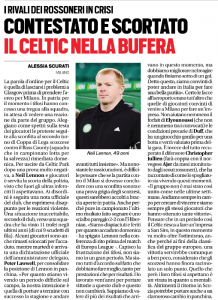 There’s almost pity towards Lennon’s squad, yet it’s unlikely Milan themselves will be feeling that.

Having a great season, this is a chance for the club to continue that, and to take advantage of a wounded Celtic.