Home Premier League Chelsea “Are you crazy?” – Player fancies “return to Chelsea”, but Tuchel could...
SHARE

Eden Hazard fancies ‘a return to Chelsea’, but there is a feeling that Thomas Tuchel would not be keen on having the Belgian in his squad.

That’s according to journalists Marc Degryse and Giles De Bilde, with the latter feeling that the German boss would quickly grow frustrated with the forward.

Hazard continues to be out of favour at Real Madrid, where he has struggled with injuries since his move from Chelsea in 2019.

He’s now been replaced by the likes of Vinicius Junior and Rodrygo in the pecking order, with it clear that he’s not anywhere near being a key player under Carlo Ancelotti.

That’s led to speculation that he could be on the move as early as January, with Madrid reportedly more than happy to get his wages, which are among the highest in the squad, off the books.

A return to Chelsea has been mooted, with it feeling Hazard could get himself back to the scintillating best that he showed at Stamford Bridge previously. 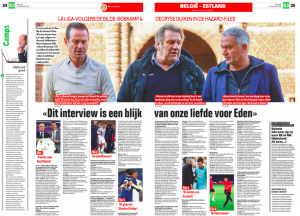 Degryse certainly feels that’s what the player wants, but De Bilde can’t see it working out under Tuchel.

“I think Hazard would prefer to go back to Chelsea. I’m keeping him at Chelsea,” Degryse told Het Laatste Nieuws in a roundtable about the player.

“Are you crazy!” De Bilde responded to the suggestions.

“Can you see Tuchel already shouting: ‘Eden! Vite! Run back!’ And then he: ‘Huh? They’re already on the other side, coach; I’m not running back, you know.'”

From Italy: Club ‘surprisingly’ in talks for Sheffield United player, ‘negotiating the arrival’

Wolves player completes medical, no obligation on deal – And why he didn’t fancy Tottenham move

Wolves player completes medical, no obligation on deal – And why...