Memphis Depay and Sergio Agüero are ‘crazy to play for Barcelona’, according to Mundo Deportivo.

The duo have less than two months left on their contracts at Lyon and Manchester City, and the Citizens have confirmed the 32-year-old forward will leave the Etihad at the end of this season.

Barca’s priority is to sign a new No.9 like Erling Haaland, but Borussia Dortmund aren’t in favour of a sale. In order to change the German club’s mind, they will need an offer of at least €150m.

Therefore, the La Liga side contemplates the idea of strengthening their strike force by signing free agents in the upcoming window. This is where Depay, an old request of Ronald Koeman, and Pep Guardiola’s man would fit in, and the two are ‘crazy to play for Barcelona’.

It’s claimed the Dutchman’s future is far away from Lyon, with La Liga and Serie A viewed as possible destinations. The former Manchester United man prefers a move to the Camp Nou over other options.

The latter offered the player ‘half or slightly more than half’ of what was agreed during the last summer window. Mundo even add the current Lyon forward’s family have already started house hunting in Barcelona.

There was talk of Juventus, Inter Milan and Atlético Madrid interest in Depay, and the Turin club could provide more twists and turns in signing the player since he would arrive on a free transfer. Koeman’s presence gives Barcelona an edge over other suitors in the Depay chase.

According to Mundo, Agüero is considered as an ‘alternative’. He’s ‘motivated by Barca’ and the idea of playing alongside Lionel Messi during the final stages of his career. Like Depay, the City attacker is willing to take a pay cut to seal a switch to the Catalan club.

Agüero earns €12m per season at the Etihad and even if he decides to reduce his wage demands, it would still be high for Koeman’s side. 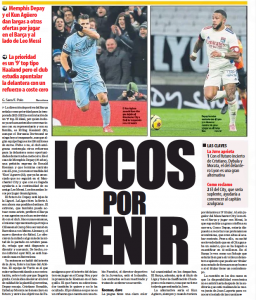 Barcelona view the former Atlético star as a good backup striker in the squad, ‘who can start if his form is very good or if the starter has a setback.‘

For now, both Depay and Agüero are so keen to play for Barcelona and alongside Messi, they have ‘put off’ other offers.