Ferran Torres’ impressive displays in his final season at Valencia not only helped him get a move to Manchester City, but also saw him make debut for Spain in their 1-1 draw against Germany on Thursday.

Mundo Deportivo have backed the winger to be a future star of the national team, and also explain why Real Madrid and Barcelona couldn’t secure his services.

When he was 17 years-of-age, Barca ‘seriously considered’ paying his then release clause of €8m, which was considered as an ‘unusual operation’ involving a young player.

As per the report, the player wasn’t interested in joining the Catalan club because of his desire to continue at Valencia.

Having developed over the years, Torres was becoming one of the key players, for present and future, at the Mestalla.

However, an ‘internal war’ at Valencia ended up in a ‘collateral damage’, which later resulted in the now 20-year-old moving away from the Spanish club.

Mundo states Barcelona and Real Madrid efforts to sign Torres this summer were ‘paralysed’ due to the Covid-19 crisis.

The two La Liga giants were not clear whether or not they could invest in his signing. Pep Guardiola’s side then took the attacker for €23m plus an additional €12m in bonuses. 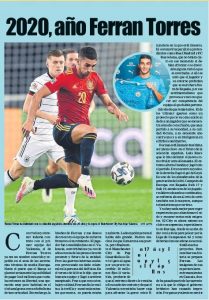 Even if Barca and Real were ready to invest in signing Torres, a deal could have been difficult because he and his environment were looking for a club outside Spain, due to his close connection with Valencia.

The newspaper suggests City ‘suits’ him because Torres is ‘comfortable with the ball, takes advantage of his pace, has technical quality, and is excellent one on one’.

Torres is backed to be a future star of Spain, and he can become one, if he manages to impress at Manchester City.