It’s fair to say Real Madrid haven’t exactly fallen in love with Thibaut Courtois since his moved from Chelsea.

The Belgian goalkeeper had long wanted to make the switch and it was only when his contract with Chelsea had got down to the final year, and the Blues had to drop their asking price, that Madrid felt it was worth the effort.

Keylor Navas has been much loved at the club and that Courtois was brought in to push him aside wasn’t the best of starts. Then he wasn’t able to show the best of the form he had for Chelsea and Belgium, and there were calls for Navas to again be considered the long term No. 1.

In the summer, the decision was made for a clean cut, and Navas was sold to PSG. Courtois probably thought that would give him some breathing space, but Alphonse Areola arrived from the French club on loan and there have already been calls for him to be first choice.

If anything, the Belgian’s situation has got worse.

Marca say he’s being followed by the ‘shadow’ of Navas and needs a huge performance for Real Madrid against Galatasaray, to help clear the doubts around him. 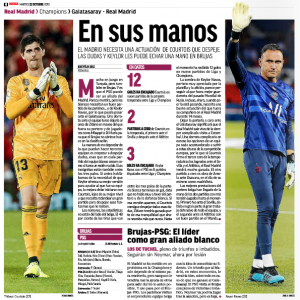 He’s said to be ‘far from his best’ and needs to ‘clear the ghosts around him’.

To push things home even further, he hasn’t been included in the final ten for the Trophée Yachine, France Football’s new award for goalkeepers, whilst his replacement Kepa Arrizabalaga has.

This very much isn’t what Thibaut Courtois had in mind when he pushed to leave Chelsea.