When Graziano Pelle joined Southampton from Feyenoord in 2014 he got a payoff from the Dutch club. Pelle was being rewarded by Feyenoord for bringing in a good fee from Southampton, about £8m, and it was all contractual.

Eredivisie clubs can’t compete with many leagues on wages, so to stop their players leaving too soon some offer the carrot of a payment when they leave. That motivates players to attract clubs like Southampton and increase their transfer fee.

However, when Pelle moved to St Mary’s, Feyenoord ended up with a big tax bill. Pelle paid his own Dutch income tax of 45% on the bonus, thanks to the Southampton fee, but Feyenoord were told they must pay 75%.

That would mean more tax being paid than the original figure. The law in the Netherlands was brought in to stop bankers being paid after leaving a job because they’d failed. But in this case it was instead punishing clubs for encouraging players to do well.

Pelle had done his bit, attracting Southampton, and wasn’t being paid for failing, quite the opposite. 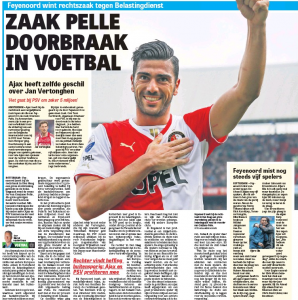 Since the transfer, Feyenoord have been in a battle with the Dutch authorities to have the ruling changed, and De Telegraaf reports they’ve succeeded. A court has ruled the extra tax on ‘excessive severance packages’ is against the European Convention for the Protection of Human Rights and Fundamental Freedoms.

The same ruling will apply to other clubs who have also been battling the tax. De Telegraaf mention a few players, and there’s every chance the same issue caused problems when Jordy Clasie and Dusan Tadic moved from Dutch football to Southampton.