Home Europe “You have to be able to let go” – Club sent player...
SHARE

Sheffield United failed in their attempt to sign Sander Berge before the start of the season, but the Blades were successful in securing the midfielder’s services in the winter market.

The 21-year-old completed a switch to Bramall Lane from Genk on January 30th and prior to leaving the Jupiler Pro League side, he was also linked with a Liverpool, Napoli and West Ham United.

Genk’s initial idea was to retain the Norway international until the end of the season and they were even dismissive about reports of the player’s potential exit in January.

However, things progressed in the final days of the window and the Belgian side were forced to allow their star leave the club midway through this campaign.

Belgian newspaper Het Belang van Limburg sat down for an interview with Genk sporting director Dimitri De Condé and he explained how Berge’s move to Chris Wilder’s side materialised.

“We wanted to keep Sander at all costs until the summer. It seemed we would succeed. But before Gent game (on January 26th), the case gained momentum. In terms of timing, it couldn’t be worse,” De Condé said.

“That Saturday we were very dismissive of his departure. But on Monday we sat down with him, his father and his management.

“[We had] a very respectful conversation and the conclusion was: it is better that we say goodbye now. Look, there are two facets in my job that I do it for. One, the experience, the interaction between players and fans, I enjoy that. And two, mutual respect.

“You have to be able to let go sometimes. If I receive text messages afterwards that show a lot of appreciation, it means something to me.” 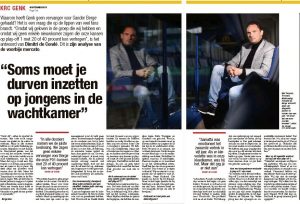 “I don’t want us, club people, to be called liars. On the contrary, I hope that former players present themselves as ambassadors for Genk.”

Berge made his Sheffield United debut during their 1-0 victory over Crystal Palace on February 1st.