Home Premier League Everton “This is correct” – Agent confirms Everton have agreed to transfer ahead...
SHARE

Henry Onyekuru is nothing if not entertaining, both on and off the pitch.

The young Nigerian attacker seems like a bouncing ball of enthusiasm who refuses to have his dreams dented.

Picking up a knee injury towards the end of last year, his loan club Anderlecht insisted surgery was needed, but Onyekuru thought otherwise, and Everton agreed, allowing him to keep his World Cup dream alive.

Now back fit, it’s possible the youngster is called up for the Russia tournament and that’s crucial for his long term plans. Anderlecht was only ever a stepping stone, what the 20 year old wants is to play for his parent club Everton.

For that he needs a work permit, and to have a good chance of getting one this summer he needs the World Cup.

But Everton and Anderlecht are planning something different. Belgian newspaper HLN report the two clubs have agreed on another loan, but the player himself isn’t sure yet and doesn’t want to commit. 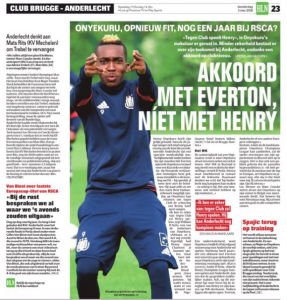 William D’Avila, who HLN describe as one of Onyekuru’s agents, is quoted confirming the agreement and explaining the delay in signing: “That’s correct. If Henry could play in the Champions League with Anderlecht, that would make the conversations easier.”

Qualification for Europe’s premier competition is still to be secured, but if Anderlecht get it, Onyekuru would have something to make the postponement of his Everton dream feel a bit better.