Barcelona defeated Deportivo de La Coruña 4-2 in the league at the weekend and with that victory, Ernesto Valverde’s side completed the domestic double by winning La Liga and the Copa del Rey.

The Catalan club have already started preparation for the next campaign as they look to bolster the squad for the 2018/18 season.

According to Spanish newspaper Marca, the Blaugrana will make an approach to sign Atletico Madrid forward Antoine Griezmann. The former Real Sociedad star has a release clause of €100m in his contract at the Spanish capital club.

The same report claims the ‘conversations have already taken place’ and Barcelona want to complete the deal for the France international ‘as soon as possible’. The club president Josep Maria Bartomeu is willing to meet the player’s asking price in order to secure the 27-year-old’s signature.

Griezmann’s potential arrival will provide the ex-Athletic Bilbao manager with four options in attack, which also includes Lionel Messi, Luis Suarez and Ousmane Dembele. The 20-year-old, who joined Barcelona from Borussia Dortmund last summer has not been consistent for the Spanish champions in his debut season.

The Atletico attacker could form a partnership with Messi and Suarez to lead Barcelona’s front three next season. Griezmann has spent his club career in Spain and should he complete a move to Camp Nou, will not require time to adjust at his new club.

He’s impressed with his goalscoring abilities for Diego Simeone’s side, with 27 goals in all competitions. This includes an equaliser against Arsenal in the first leg of the Europa League semi-final at the Emirates. 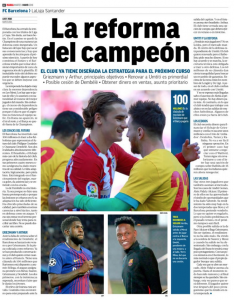 Meanwhile, Griezmann is not the only target for the Spanish giants. Barcelona also a deal agreed to sign Arthur from Gremio. The La Liga winners will be without Andres Iniesta next season as the 33-year-old has decided to leave his current employers in the summer.

Barcelona already signed Philippe Coutinho from Liverpool in January. They are still in the market to further strengthen their midfield and have set their sights on bringing Arthur, either in the summer or in the next January transfer window.