For someone who supposedly is desperate to leave Lille, Gabriel Magalhães sure is taking his time when it comes to deciding his next destination.

The Brazilian defender is expected to move away from the north of France this summer in exchange for around €30m, and with reported offers from Everton, Arsenal, Manchester United and Napoli, he’s certainly got some tasty options at his disposal.

Despite La Voix du Nord claiming he wanted to join the Gunners as quickly as possible, nothing has happened, and it could be because he’s waiting for Napoli to sell Kalidou Koulibaly.

That’s what Gazzetta dello Sport are reporting on Tuesday, explaining the Brazilian has already given his ‘yes’ to the transfer to Italy, but Aurelio de Laurentiis’ side won’t move until their Senegalese star is gone.

However, L’Equipe see it differently, not specifying whether or not the centre-back has a specific preference, but reporting he ‘should indicate his choice this week’ between Napoli, Everton, Arsenal and Manchester United. 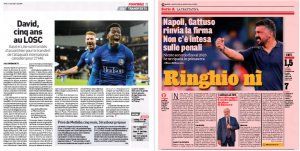 There’s every chance Gabriel would prefer to move to Italy to team up with Victor Osimhen once again, but until they make room for him in their squad, his only option is a move to England.

That’s because they’re both overloaded with defenders (hence Koulibaly needing to leave) but also because they don’t have space for him when it comes to non-EU spaces, according to TuttoMercatoWeb, with Hirving Lozano the likely sacrifice.

Either way, that’s good news for Carlo Ancelotti and the Toffees, as it sounds like they’re still in the race for the defender, who may not have a choice but to head to the Premier League if Napoli don’t sort their squad out.

Whether he chooses Goodison Park over the Emirates or Old Trafford, however, comes down to the offer Marcel Brands has made for him.

Nottingham Forest and Swansea put offers ‘firmly on the table’ –...