Once seen as the player most likely to be sacrificed by Inter, Lautaro Martinez is now someone the club are trying to avoid selling, with Alessandro Bastoni taking his place.

The centre-back could bring in a lot of money for the Serie A side, especially since they know the defender has a lot of suitors in England, including Antonio Conte.

The Tottenham manager knows the Italian well from their work together in Serie A, where they won the league, and it appears he sees him as ideal for his plans at Spurs.

Corriere dello Sport, when looking at Inter’s desire to sign Bremer, touch upon the interest in Bastoni from England.

It’s pointed out that before buying the Brazilian, Inter ‘must sell and make cash’, with the ‘most immediate offers’ likely to come from the Premier League. 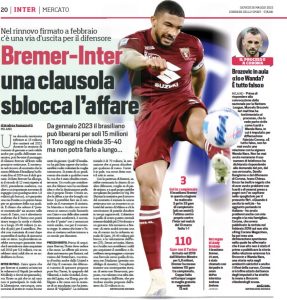 He’s ‘in the sights of Tottenham’, but the Serie A club have ‘no intention of giving him away’.

In fact, the ‘initial request is €70m’, but there is a feeling that a deal can be closed ‘for something less’, probably with bonuses and structured payments.

Either way, it’s made clear that Tottenham’s ‘Conte is in pole position’, but isn’t the only one, with Manchester United and Manchester City two clubs also keeping an eye on Bastoni.