Following a decent start to his time at Tottenham, Antonio Conte witnessed a rather dire performance against NS Mura in the UEFA Europa Conference League.

With Spurs down to 10 men following a Ryan Sessegnon red card, the Slovenian side scored a 94th minute winner to record a historic win for their club, defeating one of the biggest managers in the game and one of the bigger teams in the Premier League all in one go.

This shows that there are still remnants of the struggles faced by both José Mourinho and Nuno Espírito Santo at the London club, and there is a lot of work ahead for the Italian, who has never shied away from a challenge.

He explained as much in an interview with Sportweek, which comes out on Saturday, with Gazzetta dello Sport publishing a few snippets in their Friday edition.

Conte said: “Challenges have never scared me, I just need even a 1% chance of winning them to start my battle. I have never taken teams that had won the year before, mine are always paths of reconstruction. Juventus came from eighth place, Chelsea from tenth, Inter from fourth.

“I know it will take a little patience this time. In Milan, I left a finished job. Here, I have to start all over again and coming in halfway through the season is never easy”. 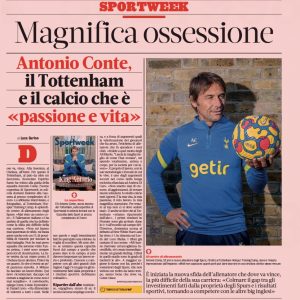 One of the main problems many thought could occur at Tottenham if Conte took over was a clash of personalities with Daniel Levy.

Only time will tell if those worries were truly founded, but from what the Italian manager revealed, it’s fairly clear there is a strong desire from both parties to get the relationship to work.

He explained: “He has shown me that he wants me at all costs. In his words and in the investments made, I saw a vision: the desire to excel. I said to myself: if we combine this ability off the pitch with what I can give on the pitch, we can really set up a serious and profound work.

“To grow and compete with other great English clubs. Today, there is a gap between the investments made by the owners and the sporting results. We have to fill it”.