Home Premier League Chelsea Chelsea will have to invest around €40m to secure target, which sounds...
SHARE

Another day, another update on the situation of Maurizio Sarri, targeted by Chelsea, who slowly but surely seems to be on his way out from Napoli at the end of the season.

The Italian manager, who looks like he will just fall short of dethroning Juventus at the top of Serie A, has yet to extend his contract with his current club, and will be available if someone pays his €8m release clause.

This has caused Aurelio de Laurentiis to try and get Sarri to renew, to no avail for now, and a number of clubs, including the Blues, are circling.

Corriere dello Sport on Tuesday name Monaco, Zenit St Petersburg and Shakhtar Donetsk as potential landing spots, although they do spend a longer amount of time on Chelsea, mostly due to the hindrance that is Antonio Conte’s severance package. 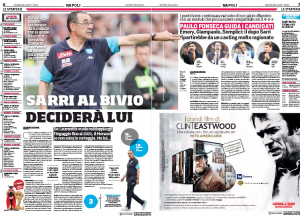 This has been a recurring theme in all these stories, as getting rid of his current manager will be expensive for Roman Abramovich, who will then have to commit even more funds to attract Sarri.

Corriere explain that whoever decides to make a move for the Napoli man will be investing around €40m into their manager, broken down as an €8m fee for the release clause and a five year contract of around €8m/year.

Cut that down to three years, and it’s still just over €30m.

Then again, if you want results on the pitch, you have to pay the man in charge. Just ask both Manchester clubs.