Following AS Roma’s loss to Bologna midweek, José Mourinho made the rather surprising claim that he felt Nicolò Zaniolo might be better off trying his hand at playing football abroad.

This stemmed from how he is treated on the pitch and by fans, as well as the fact he is still waiting for a renewal offer from the club.

Already linked with Tottenham before that, the midfielder was immediately sent to Spurs, at least in writing, by the Italian media, where Antonio Conte and Fabio Paratici are big fans.

Corriere dello Sport double down on this on Friday, claiming the Italy manage ‘really likes’ Zaniolo, and would ‘really like him’ in his squad.

While a January move seems to be off the cards for now, ‘the call of the Premier League may be strong again in the summer, as it was before the double injury’. 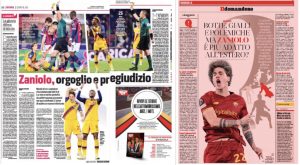 Tottenham were ‘courting’ him at the time, back when José Mourinho was manager, but the Friedkins, Roma’s owners, ‘are betting on him for the future’ and consider him ‘non-transferable’.

Over at Gazzetta dello Sport, however, the line is a bit different, claiming the Serie A side value their star at €70m (a bit more than the €40m pushed on Thursday), which would be affordable for Spurs if Daniel Levy decides to open the club’s wallet once more, this time for Conte rather than Nuno Espírito Santo.

Something to keep an eye on.