It was a quiet weekend for Juan Cuadrado, sitting in the stands as he watched the team he is currently contracted to come back from 1-0 down to overcome a resilient Watford.

The Colombian winger, who appeared to be in Antonio Conte’s plans when the Italian was installed as José Mourinho’s long-term successor, is now in an uncomfortable transfer limbo.

Juventus have made it rather clear they wouldn’t be against Cuadrado returning for another season following his successful spell last term, with a meeting allegedly taking place on Monday, but ‘everything is closed’ as things stand.

The reason for this, according to Gazzetta dello Sport, is Antonio Conte is yet to give the green light for any transfer regarding his right-winger even though he’s currently leaving him out of his squads altogether.

This could, after all, be because of the transfer speculation surrounding him right now.

Juventus are even prepared to pay €3.5m for the duration of the loan, but don’t want a buyout clause.

As things stand, it seems Cuadrado is still on his way out, and considering how late it was done last summer, we could be in for a repeat this year. 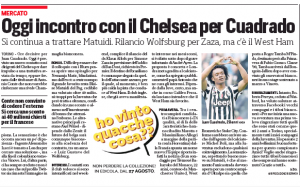 Corriere dello Sport are also reporting on a meeting taking place on Monday, suggesting the agent might have something to do with this news.