Hugo Lloris is in his final year of contract and back in August, the goalkeeper said renewal talks with Tottenham Hotspur hadn’t started.

Spurs signed Pierluigi Gollini on loan from Atalanta in the last window and reports then suggested he was set to challenge the 35-year-old for a place in the starting XI. That, however, hasn’t happened so far this season.

L’Equipe now claim the France international has ‘wondered about his future’ since Mauricio Pochettino left the club in 2019. The situation has now changed following Antonio Conte’s arrival last month.

The former Chelsea manager ‘absolutely wants Lloris to extend his contract’ because he plans to keep the custodian as a key player in the squad and within the dressing room.

On Monday, reports in the British press indicated Lloris’ renewal talks have started. It was also stated AS Roma showed interest in signing the World Cup winner in the summer. 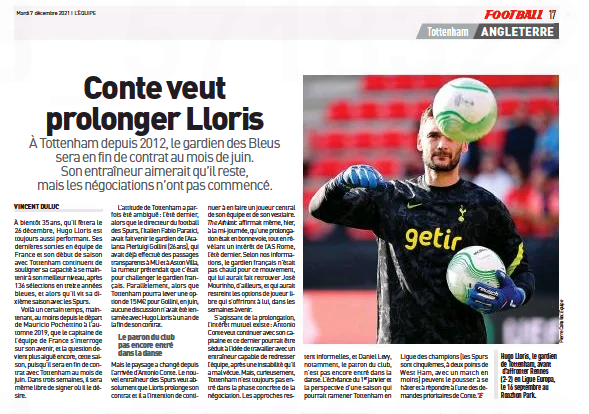 According to L’Equipe, Lloris was ‘not keen’ on reuniting with José Mourinho at the Serie A side.

Regarding the renewal, it’s explained ‘mutual interest exists’ between Tottenham and the keeper. Conte ‘wants’ to retain Lloris, and the Frenchman could be ‘seduced by the idea’ of working with the Italian, who is capable of helping his side challenge for silverware.

‘Strangely’, L’Equipe explain Tottenham have ‘still not entered the concrete phase of the negotiations’. The approaches between the two parties so far have been informal and Daniel Levy has ‘not yet entered the dance’, meaning he is yet to join the extension talks.

Without a renewal, Lloris will be allowed to negotiate a pre-contract with another club from next month.