Despite certain members of the media reporting the deal as done, Olivier Giroud isn’t a Milan player just yet.

Helping his side lift the Champions League by beating Manchester City 1-0 in Portugal, the Chelsea striker is now expected to move on from Stamford Bridge and start a new adventure elsewhere.

Milan was said to be his next destination, and while Gazzetta dello Sport do believe the offer has been made, it hasn’t been entirely accepted just yet.

While a two-year deal is ‘on the player’s table’, it also ‘isn’t the only one’,  as there is a ‘high number of suitors’, with offers from Spain and England, ‘a country to which he is particularly attached’. 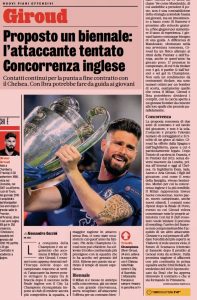 Contacts between the Chelsea player and Milan ‘resumed after the Champions League final’, with the Serie A side wanting to ‘start the restyling process with him’, as his arrival ‘would not compromise the purchase of another striker’.

The likes of Dusan Vlahovic or Gianluca Scamacca remain in the club’s iron sights, as the need for a younger goalscorer is still there, but with Mario Mandzukic leaving after just six months, Giroud is ‘exactly what Milan are looking for’.

Certainly something to keep an eye on, as a good offer from the Premier League could sway the Chelsea man’s decision, with his family completely settled on these shores after nine years.