Aleksandr Golovin was one of the standout players for Russia against Saudi Arabia and Egypt at the 2018 World Cup.

He didn’t play against Uruguay, being rested, but it hasn’t stopped Golovin from attracting interest from big European clubs. Mundo Deportivo mentions Barcelona are looking to strengthen their attack and that’s why the CSKA Moscow star has emerged as a target for the Catalan club.

Barcelona tracked the Russian international during the course of the last season through their former technical secretary, Robert Fernandez. The La Liga winners even approached the attacking midfielder’s entourage.

Eric Abidal replaced Fernandez as the new technical secretary at Camp Nou. The Frenchman’s arrival has not changed Barcelona’s idea to sign the 22-year-old, who is also linked with Juventus, Arsenal and Chelsea.

The report claims there have been “more contacts” from Ernesto Valvere’s side to find out the “possibilities of signing” Golovin after Fernandez’s departure. Russia will face Spain in their first knockout fixture and Barcelona are planning to send one of their officials to watch the player in action.

Christian Eriksen was one of the main objectives for Barcelona, but they are aware that signing the Danish international from Tottenham Hotspur seems impossible. Mundo 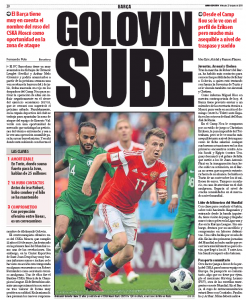 Deportivo believe Golovin’s style of play can be compared to Eriksen and he can be a cheaper alternative to Spurs star, both in terms of the transfer fee and salary.

Mexico’s Hirving Lozano has also emerged as a target, but Golovin holding a Russian passport gives Barcelona an advantage in signing him over Lozano.

The La Liga rules allow each club to register no more than three non-EU players in the squad, and, after a test case, Russian players don’t take up one of the places.