A day later, FcInterNews stated the north London club have ‘contacted’ the defender’s representative. It was also reported Inter have informed the agent his client could be sold, if they were to receive an offer of ‘not less than €60m’ this summer.

Tottenham Hotspur interest in the 23-year-old is now further discussed in the Italian media.

Corriere dello Sport relayed comments made by Inter CEO Giuseppe Marotta and also the club’s need to make ‘at least one important sacrifice’ in the transfer market.

“We want to be ambitious, but an eye to the balance must be given, as for all teams. I think we will be able to achieve both goals,” Marotta said.

“A complicated transfer market awaits us, but again next year we will be able to set up a competitive team, according to the wishes of our coach. We have excellent managers such as Ausilio, Baccin and Zanetti: they will certainly make a level market.”

Inter will have to make around €60-70m and reduce their wages by 10 to 15 percent. When it comes to making the ‘important sacrifice’, the report says Bastoni’s name is in the ‘front row’.

Corriere further explain that Tottenham Hotspur are ‘ready for the assault’ to land the Italy international this summer. 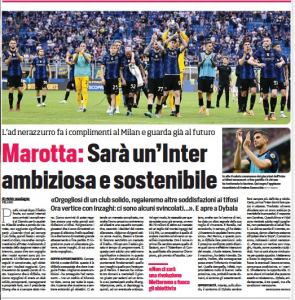 Over at Sport Mediaset, they explain it will be time for the Serie A side to ‘plan the market’ once Ivan Perišić’s situation is resolved.

It’s claimed ‘at least one valuable’ player will have to be sold and Bastoni gets a mention. The defender is liked by Tottenham Hotspur.

Inter need to raise funds and are likely to sacrifice Bastoni. With Spurs contacting his agent, more sources are now stating that Antonio Conte’s side are ready to make an approach for the player.