Islam Slimani’s problem has long been that lots of clubs have been interested in his services, but he’s often a couple of names down the list or dependent on what happens with other players.

The 32-year-old’s contract at Leicester City expires at the end of June, and it’s highly likely the Foxes would let him go in January for a token fee, maybe even releasing him from the final months of his contract.

Saint-Etienne have been repeatedly linked, yet their finance problems mean they’d find it hard to pay Slimani the wages he’s likely going to be asking for.

Saturday’s edition of L’Equipe brings the Ligue 1 side’s fierce rivals Lyon into the picture, but again the signing of Slimani would be conditional on other things happening. 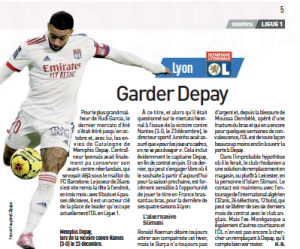 According to L’Equipe, ‘contact is maintained’ between Lyon and Slimani’s entourage, and it’s stated as fact that Leicester City would allow him to move on a free in January.

That option will only become serious should Memphis Depay leave the French club in the winter market, with his contract also expiring in the summer.