According to Turkish newspaper AMK, Fenerbahce are interested in signing Crystal Palace midfielder Yohan Cabaye in the January transfer window.

AMK claim Fenerbahce manager Aykut Kocaman is a huge admirer of Cabaye, and has told the club’s board he’s the player he needs in the middle of the pitch.

Fenerbahce have reportedly contacted Cabaye’s agent about a possible transfer next month, and the Turkish club are looking to sign the Crystal Palace star for a reasonable transfer fee. 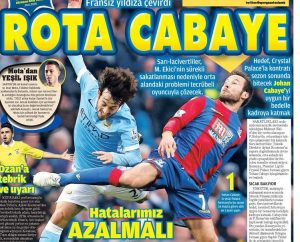 Cabaye’s contract with Palace will expire when the current season ends, and the Fenerbahce board are hoping to use this to their advantage.

It’s reported Kocaman has told the Fenerbahce board Cabaye will solve the ongoing problems in midfield, and the newspaper also claim the Frenchman is keen to join the Turkish giants in January.

The 31 year old has played a key role in Crystal Palace’s recent upturn in form, and has been an important player in Roy Hodgson’s team.