Christopher Nkunku to Arsenal ‘isn’t broken’, according to both Wednesday’s edition of L’Equipe and the player’s agent.

The 21 year old has expressed his desire to leave PSG this month, report the French newspaper, and it’s a move which could still happen.

PSG remain in talks to sign Idrissa Gueye from Everton, and Nkunku’s future could rest on the outcome.

On Tuesday evening the player’s agent was on French TV, speaking to the Late Football Club show on Canal+.

FootMercato have picked up what he said and quote Jose Pierre-Fanfan as saying: “If I’m here tonight it’s not a good sign, there is real interest from Arsenal for Nkunku but the dealings are quite complicated, there are restrictions on Arsenal, they cannot make transfers in this period.

“They talk with PSG, it can happen again in 48 hours but as I said, if I’m here it’s not good. His situation will have to be studied in June, there will only remain one year of contract, his situation will be evaluated. He is a young boy, who needs to play, to blossom, to register for the duration in a project, that’s what he’s looking for, he was in tune with Arsenal but it seems complicated, if it’s necessary to wait he is ready to do it, he will wait.” 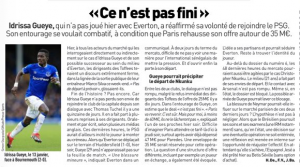 It isn’t mentioned by any of the sources, but PSG trying to use the player to complete the Idrissa signing, either by tempting Everton with a loan or permanent deal, seems a reasonable option to try.

From an Arsenal perspective, the Gunners will hope a straight deal for Gueye can be agreed very quickly, allowing Nkunku to join them before Thursday night’s deadline. 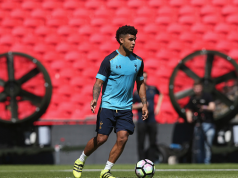