Towards the end of last month, we carried a report from Voetbal International, who stated that Arsenal are in ‘pole position’ to sign PSV Eindhoven star Cody Gakpo.

It was also stated the winger has attracted attention from other clubs, but ‘there is a good chance’ he will end up joining the Gunners in the summer.

De Telegraaf journalist Valentijn Driessen mentions Arsenal’s interest in the 22-year-old in his column for the newspaper, where he is critical of Ajax manager Erik ten Hag.

The Netherlands international scored the winner for his side in the KNVB Cup final as PSV came from behind to beat Ajax 2-1 last weekend. Ryan Gravenberch got his name on the scoresheet for the Amsterdam club. 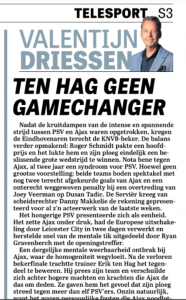 After backing up Arsenal’s interest in the PSV player, Driessen went on to state that Gakpo was ‘constantly threatening’ in the cup final.

The journalist then praised the attacker for his performance and scoring the winner against Ajax.

Driessen claims both Gakpo and Gravenberch ‘did better business on the way to their foreign adventure’ in the cup final. The PSV player has 18 goals and 15 assists in all competitions this season.