It’s been a little complicated to keep up with all the claims about Manchester City’s involvement in a deal for Velez Sarsfield wonderkid Thiago Almada.

The simple part is: the Premier League side are said to be interested in buying the player and sending him to their partners at Sporting, where he can develop for a season.

We’ve been reading a lot of stories coming from Portugal in the past couple of days, and each one of them says the deal will be done a different way.

So let’s take claims from each of the most important sports newspapers in the country and show what they’re saying. 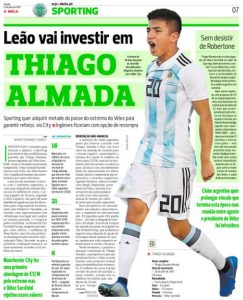 Newspaper A Bola says the City Football Group tried a first approach, where they would pay €12m for the signing. But that amount has been rejected by Velez.

It’s claimed that the intention is for the City Football Group to buy the player from the Argentine side, then Sporting would buy 50% of his rights from the group to bring him to Lisbon.

Almada would be a Sporting player. Only then Manchester City would have the option to get him with a buy-back clause, paying more than the Lions paid for the 50%. Complicated, we know.

A Bola also says the player is protected by a €16m release clause, and the negotiations to increase it to €25m haven’t been successful so far. 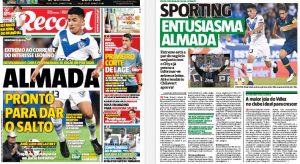 Meanwhile, newspaper Record has a story explaining he’s been excited by the rumours, and has already spoken to people to find out what it’s like to play for Sporting.

Record says that Manchester City are willing to pay €20m to sign Almada, and then they would loan him to Sporting for one season. That’s far more simple. 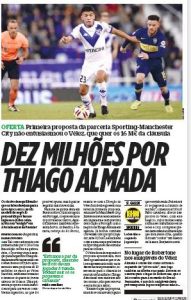 “We are aware of the proposal, but it’s not a player that is for sale. He can leave only if they pay the release clause,” Cavallero told O Jogo.

O Jogo says the details of how Manchester City and Sporting will share the player are still being discussed. The winger himself has already accepted to play for the Lisbon club first.