A couple of days ago, we covered a story in L’Arena about West Ham’s interest in Ivan Jurić.

The Hellas Verona manager has done wonders with the Serie A side this season, taking them into the top half of the league after 25 games against all odds.

His performance at the helm had allegedly caught the eye of David Sullivan, with the Hammers somewhat underperforming with David Moyes at the helm.

Now, we have Gazzetta dello Sport backing this information up, claiming West Ham ‘took notes’ about the Croatian manager, who could very well stay put.

It’s explained Verona want to tie him down for the foreseeable future after this season’s results and ‘the willingness to move forward’ with the club is also there from Jurić. 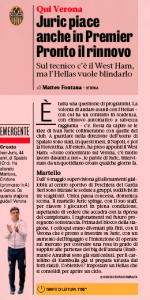 For now, the manager is pushing his team to be ready in case the season starts again in Italy, and while they are likely to lose some of their big names in the summer, the club are keen to reinvest and give him the assets to continue his good work.

That means West Ham will have to move quickly if they want the Croatian at the helm next season, and they might have to be extra convincing, especially since he seems very comfortable where he currently is.