On Tuesday, we covered claims from Italian journalist Nicolo Schira, who claimed Lorenzo Pellegrini had received offers from Arsenal and Tottenham.

The AS Roma midfielder has a €30m release clause, payable in two instalments, which makes him an easy target for clubs looking for a young and talented player.

However, we made it clear that everything rested on the 22-year-old, as even if a club were to make a move for him, he would still have the final say regarding his future.

We speculated he was likelier to remain in Italy than make the jump to the Premier League (unless he was pushed), and Il Tempo on Wednesday confirm this, explaining Pellegrini is ‘inclined to stay’ at Roma. 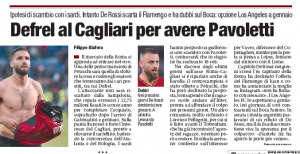 This comes just after the local newspaper corroborate claims of Tottenham’s interest, revealing that Spurs went as far as ‘meeting with the youngster’s agent’.

Roma are trying, in the meantime, to renew Pellegrini’s contract, wanting to, first and foremost, get rid of that rather ridiculously low clause.

If he does want to stay, then that shouldn’t be a problem.