There’s a little snippet in Friday’s edition of Sport which will be of interest to Manchester City supporters.

Always keeping an eye on Pep Guardiola’s life in the Premier League, Sport are this time pointing out that Barcelona have been on the losing end of Manchester City’s recent growth.

In their ‘confidencial’ section it’s stated that Manchester City have followed Barcelona in Portuguese scouting. The country is said to be considered a hotbed of football talent, and more eyes are now watching the best players emerge.

Sport’s then present an example: it’s stated that Barcelona officials recently visited Sporting and wanted to watch two players in action. Once there they found out ‘Manchester City 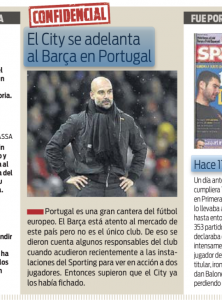 had already signed them’.

There’s no players named, no ages given, and absolutely no clue whatsoever who it may be… just a claim that Manchester City have secured two products of Sporting’s academy, and beaten Barcelona to it.

“I have big plans” – 39-year-old on Celtic stint, hints at taking managerial job in Scottish football