Catalan newspaper Sport have a ‘Confidencial’ section of Barcelona news each day, which is usually a small snippet based on some information they’ve been given.

On Tuesday it features Everton.

Sport claim ‘Everton asked for Jose Arnaiz and Paco Alcácer’, presumably during the January transfer window or it wouldn’t make a whole lot of sense.

Everton are said to have been impressed with Arnaiz’s emergence at Barcelona, after he made his debut recently, and contacted Barcelona to ask about hiring. The answer, explain Sport, was negative, and the move won’t be happening.

The same can be said for Alcacer. 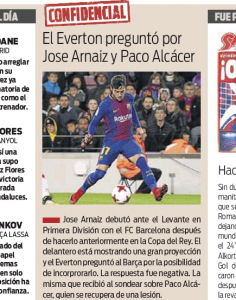 Arnaiz is a 22 year old Barcelona B forward, who has made a couple of appearances for the club’s senior team recently. There were reports of English interest right after his debut, although it did seem somewhat forced by the Catalan media.

Barcelona’s most friendly press would have their readers believe English clubs are trying to get all the club’s best youngsters, and being turned down, but it doesn’t always feel like it’s true.

As for Alcacer, there’s every chance he was an option before Everton plumped for Cenk Tosun.