After winning his sixth Ballon d’Or on Monday, Lionel Messi spoke about his contract situation at Barcelona.

“People know me and know that there are no problems with that issue. What I feel for this club goes beyond any signature, any contract or any paper. It’s one more thing about how I feel and I want to feel fine while I’m at Barca,” he said.

The player’s current deal expires in 2021, but as a part of the contract he can leave Camp Nou for nothing after the end of the season.

Barcelona president Josep Maria Bartomeu also spoke about the 32-year-old on Tuesday, and when asked about the renewal, he said: “The renewal is another matter. Now we just got to see Leo winning the sixth Ballon d’Or and I think there will be many more.” 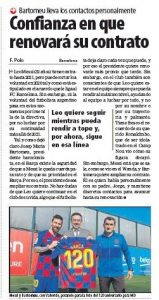 Mundo adds ‘There is no doubt that Leo wants to continue in the club of his life, something that the player makes clear every time he can, and that is why the president wants to renew him sooner rather than later.’