Alvaro Morata arriving at Atletico Madrid is the final nail in Nikola Kalinic’s coffin and a transfer is likely this month, believe the Spanish media.

With five La Liga starts so far this season, and a further six as a substitute, the Croatian has managed two goals. He’s not a core part of Diego Simeone’s plans, and that’s further exampled by the effort being put it to sign Morata from Chelsea.

Monday’s edition of Marca claims the player has offers from four of Europe’s five big leagues. From the Premier League, the interest is described as ‘concretely Tottenham’, which would present it as rather serious.

In France, some at Monaco have been keen, although there’s not consensus. Valencia are being linked, just as they are with every conceivable striker, and there’s also thought to be interest from Italy.

Tottenham were linked with Kalinic back in his Fiorentina days, but it never appeared to be a deal which was close. 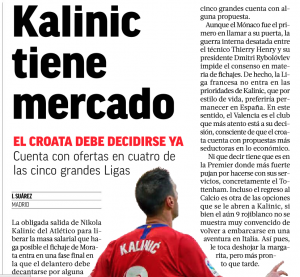 The London club are currently being thrown into the mix for strikers in a way similar to Valencia, thanks to the injury to Harry Kane.

However, unless it’s a short term loan move, which is possible, it’s hard to imagine Mauricio Pochettino being excited about signing the 31 year old. The footballer’s reputation took a blow in the summer when he was sent home by Croatia during the World Cup, after allegedly refusing to come on as a substitute.