The German newspaper say the fullback has received a very attractive wages offer from Newcastle United, who would be prepared to give the 17 year old €5.3m over three years.

Manchester City, Arsenal and Chelsea are all credited with interest in the youngster, but it’s the ‘concrete offer’ from Newcastle which stands out for the Hamburg publication.

After suffering their first ever relegation, Hamburg have been worried about holding on to lots of players, both established and younger, but Mopo says Vagnoman is ready to snub Newcastle’s big money and remain with HSV.

The reasoning behind turning down a Premier League move to play in the Bundesliga 2 is all about development, and Vagnoman is willing to earn much less money to follow the route he thinks is best. 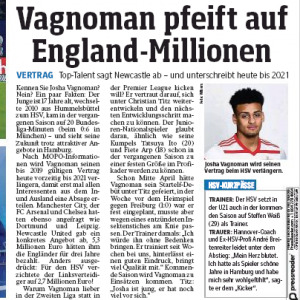 It may be disappointing from the perspective of Newcastle interest, but the young footballer, who turns 18 in December, could be making the right decision. He’s far likelier to get games in Germany’s second division than he is in England’s first.

There will be an element of the local paper MoPo bragging over this, and rightly so, but someone will have fed them the offer figure from Newcastle and it’s likely to have either come from the German club or the player’s representatives.