The front page story of Portuguese newspaper Record today says Sporting will be listening to all the offers they get for their players in January.

And this, of course, means rumours about the departure of their biggest star Bruno Fernandes are totally back from the dead.

The captain had been heavily linked to Manchester United and Tottenham Hotspur in the summer, and it looks like he’ll be back being one of the most commented players of the market very soon.

Record says Sporting won’t force any deals, but will analyse all offers, with no ‘untouchable players’, clearly meaning that Fernandes is in the list of possible departures. 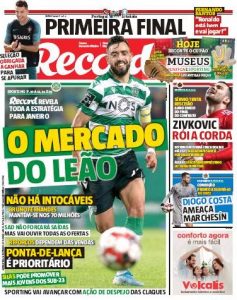 It’s said that the Lions will be available to listen to the clubs who can show ‘concrete interest’ in the player, ‘like Manchester United and Tottenham Hotspur did in the past’.

His price tag, however, continues to be of €70m. Just yesterday, we’ve covered some claims from Portugal explaining why Sporting can’t sell him for much less than that.